Update: As of April 2016, Google has shut down PageRank data to the public.

Google has repeatedly mentioned that site speed, load time and performance of a site does matter for Google on search engine rankings. While I’m not into SEO and I rarely cared about Google PageRank in particular, I have been in shock for the past 10 days or so, even since my Piwik statistics showing me that this site’s Google PR went from nil to 5!!!!! Yes, that f-i-v-e, five out of the maximum of 10! 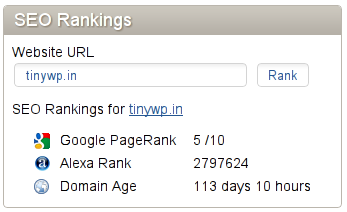 The above image is the screenshot that I took now from my Piwik statistics area. The PR has been like this since mid-February, 2012. If you wonder what Piwik is, it is an open source real-time web analytics program that has been used on this site since its launch. You can verify this site’s Google PR using your favorite PR checker tool, or head over to captcha-less PR checker by Nathan Friedly. I’ll update this post too, if this site’s Google PageRank changes in the future.

How did I do this?

Long version: I know the basic SEO. I’ve had several domains in the past actively developing them for the first few weeks of buying the domain/s :) :), then dropping them during the renewal time. :) Some of those lost domain keywords are luckweaver (.net and .com), freelancelens (.com), and fancyforms (.com). Also note that, even though I have not been concentrating on SEO, I still do know the basics. I do know that every page should have clean structure (h1, h2, bold, etc), I do know that having quality links pays off (thanks to WordPress), I do know that black-hat techniques wouldn’t work (but actually hurt) in the long term.

A friend of mine (who is specialized in SEO) pointed out that it may be due to Google dance and this site might drop its ranking altogether too. :( (back to zero or no PR)

How can you do this?

Long answer: Buy a nice domain (don’t buy an old one if you don’t know its history), write unique and great content (while I don’t call my articles as great), buy a nice hosting packages, buy a unique IP, make your site runs as fast as possible, don’t put advertisement from day 1, if you decided to put ads, don’t put them all over the site in such a way that you have more ads than the content, etc. The list can go on and on with hundreds of do’s and don’ts.

Even if you follow just three tips from Matt Cutts, that would be super cool for your site’s SEO and its Google PR.

Update 1: Ever since (August 2012), I moved my domain to have HTTPS, there seems to be a complete drop in the PR for my site. But, it is a very natural phenomenon. I should be able to get to the original PR in a few months. I will give another update when that happens.